Yay! Screencaps! I remembered this time!

Fruits basket is starting things off with a little bit of panic, a few of antics and a lot of emotions.  I’m both pleased and not quite sure what to think.

We pick up right where the last episode left off. Torhu is going through the traumatic experience of having just seen three men turn into animals.

And then she goes through another even more traumatic experience!

After this though the episode dropped some of its excitement and proceeded to jump into the territory called feels…and I’m not entirely sure how I feel about this move. We see both Yuki and Kyo come to accept Torhu, because she is going to be living with them.

Yuki tells Torhu about an experience from when he was a kid. A girl at school hugged him, causing him to turn into an animal, and they had to erase everyone’s memories. We see how much this still upsets him. Torhu acts differently from how he expects though and the two begin to bond.

Kyo, on the other hand, is dealing with his anger issues towards everyone. He hates Yuki, is horrified about going to a new school with a bunch of girls, and doesn’t really know what to think of Torhu. Then he has a talk with Shigure who of course mentions the idea of love, loving and being loved. Good old Shigure.

I feel like the emotional bonds between the characters are being built quicker then they were in the manga. Or maybe they are just being built better, because now that I think about it Torhu was accepted into the house right away. I really want to reread it right now. All I know is that the series is doing a lot of foreshadowing and a lot of leading when it comes towards hinting at possible relationships already.

I’m kind of glad, because I found the beginning of the manga to be kind of bland, but cute. This one is laying down a lot of promises and hints from the get go, and I think its because they know where the story is going, while the mangaka didn’t always know at first.

I think the episode was a little more awkward then the last one. It didn’t cover as much ground and I feel like it lost a bit of its momentum, but it was still good. Some of the camera angles we got were weird, like when Torhu and Kyo are almost completely obscured by school desks as we try to look at their legs. The humor as well was kind of strange to me, but I always run the chance of finding that when watching anime.

At least we still got a bit of Hana and Uo. I love them! 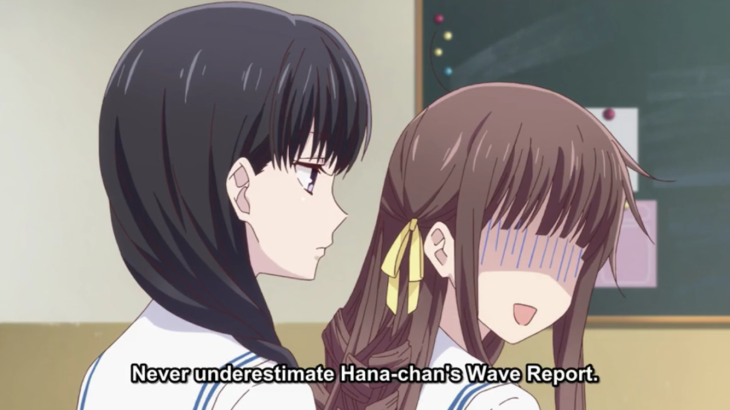 I’m still incredibly excited and happy about this series, but something tells me I might not enjoy the next few episodes as much as I hoped. I shouldn’t be surprised. So long as it stays true to the manga though I should come out happy on the other end of it!

Until Next Time, Always Make Your Heart Rainbow!