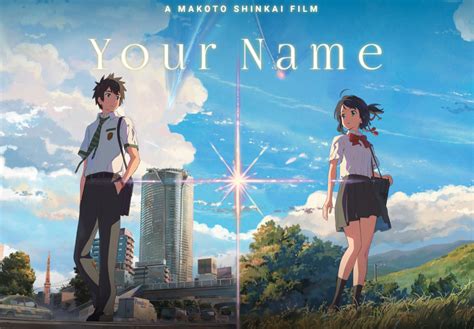 When I first joined the anime community, it was absolutely abuzz with two movies. Those movies were A Silent Voice and Your Name. Of the two movies, Your Name was praised for its storytelling and the beautiful animation that is associated with its director, and A Silent Voice was praised for its storytelling and the hard topic it dealt with. This weekend I decided I would watch one of these two films. After much deliberation I chose Your Name.
After watching a lot of post-World War 2 movies that dealt with children I wanted something a bit different. Your Name takes place in modern day Japan and the main characters are teenagers. The story deals more in the scientific and supernatural realm, making for an incredibly different story. I figured I would probably enjoy it more over a movie that deals heavily with the topic of bullying.
Two young people- a teenage girl, Mitsuha, who lives in a small village and a young man, Taki, who lives in the city -are switching bodies and they have no idea why. Both are somewhat unsatisfied with their lives and have reached a personal rut. Then things change and by going through the switch they begin to mess with the each other’s lives. Upon going through the body switch they each believe that the events taking place during it, due to their hazy memories regarding the incident(s), are nothing more than dreams. Soon though, when their friends begin to tell them how oddly they have been behaving on previous days, and with gaps in their memories; the two begin to put two and two together.
It was fun to watch Mitsuha and Taki try to figure out what was going on. Using the wonderful technology that is mobile devices, they would leave each other notes asking questions, and as they became more accustomed to the places and bodies they were inhabiting the more comfortable they were in the others shoes. They would try to not mess up and learn names and events. They would also begin to do things that would better the others life. For example, at one point in the movie Mitsuha sets Taki up on a date. The two set rules and standards that are both followed and broken and it makes for an entertaining sequence of events. The movie switches back and forth between full scenes to straight up montages that were put together very creatively.
The topic of switching bodies is nothing new. If you look it up you can find lists of the top ten movies with body switching and even top twenty lists. My personal favorite movie in this lineup is Freaky Friday. The difference between that movie and this one is that the two characters in Freaky Friday know each other (mother and daughter) and the characters in Your Name have never met. They also don’t know what’s causing the switch and by the end of the film I still wasn’t sure of the cause. Fate? Which made for an interesting twist. The switch is something they couldn’t control, it wasn’t constant or static, it was unpredictable and when things changed the characters reacted the new status quo in a way that I had never seen.
On top of the new take on this interesting premise and the way scenes are put together (I just want to watch the whole thing all over again right now as I talk about it), the world this movie is set in is beautiful. The animation aesthetics are nothing less than breathtaking. I expected this and was not disappointed in the slightest. Any work that Shinkai touches is incredibly beautiful! To see something subpar from him I think would be an incredible shock. There are still moments, moments of dancing and fluid movement and everything is pure eye candy. Calling it eye candy almost feels like an insult though. I’m not sure why.
The characters in this movie feel incredibly real in how they deal with these situations. I feel as if they are more real than any of the other characters in Shinkai’s films. Perhaps that’s because I feel like the situations and things in this movie were slightly less Allegorical then in his other works that I’ve seen thus far. Also, like I said, watching them deal with the body switch was unlike watching other characters and that might have in itself had something to do with it.
The movie is beautiful and it hits hard, but I can’t really talk too much more about it without giving the entire movie over into spoiler territory. I’ve read other reviews here and there and I feel like it’s a common problem. I want to say more, but I can’t. I think that’s a good thing. I don’t often feel so burdened to be careful about my words and I feel like its not usually so hard to skirt along the edge of spoiler territory. I think this goes to saying just how expertly woven this story is. You can’t touch on too much of it, without revealing the whole.
The film is, as far as I’m concerned, a must see. I highly recommend it on so many levels. Hopefully you’ve seen it and if you haven’t you plan to watch it soon.
Until Next Time, Always Make Your Heart Rainbow!