Hey everybody, if you haven’t seen a post with this title yet, then I would like to introduce one of the best tags I’ve ever had the chance to participate in! The wonderful Arthifus came up with the brilliant idea to bring the community together in this amazing tag where we work towards writing a book. It’s basically a round robin Endeavour, something I’ve only ever seen on fiction forums. There is more and better information about the tag below.

Alright! I’m so happy to have the opportunity to participate in this tag! Here Goes!

The seven maisters had created a circle with NoGender and Ligeia in the center. They also had diminished the light of the room and now the only light present was coming from the 7 candles positioned at the front of each maister making scary shadows in their faces. 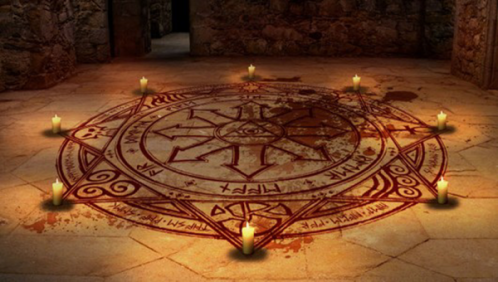 Below of NoGender and Ligeia was a complex diagram written in blood, its center starting where their bodies finished. NoGender was scared, he didn’t know what was happening and it had received zero explanations. Ligeia had used all the time for explanations arguing and saying she didn’t want to do this, that she didn’t know NoGender and they were asking too much of her. However, after a while she understood this was an argument she wouldn’t win, she accepted defeat and decided to go along.

– Very well! – One of the maisters said, NoGender could not pinpoint which one – The time is near, you need to strength your bond before the time runs out. What you did in that library is just too rare and in the timing that happened… We can’t just say this is a coincidence. I’m not one to believe in destiny, but maybe you will prove me wrong. In conclusion, we can’t let this opportunity pass by, you need to become one before the time runs out and your wavelengths stop being in accordance.

– You will do the test of the tests. However, I’m afraid to say that it will only become harder from here. We will transport your souls to the spirit World. There you will need to find your way, work together and be able to come back. It’s not going to be easy, but it’s imperial for you to reach plenitude and reach your full potential. Water and Soul need to become one.

After this being said, everyone went silent and, without warning, all seven maisters started mumbling in unison some kind of spell in a language which NoGender did not recognize.

Wind, water, fire and earth, the four elements appeared and started circulating NoGender and Ligeia. It started to get more condensed and closer to them until the moment where anyone from outside would only see a multi coloured ball in the center of the diagram.

NoGender didn’t know what he was feeling, he just knew that it was not good! When he though he would not be able to take it anymore and just throw up, everything went black.

The shroud of black that enfolded NoGender and Ligeia D. Mortem slowly began to disperse, revealing to NoGender that they were both still standing in the circle. It looked around confused, it seemed as though nothing had happened, until looking down it could see both of their unconscious bodies laid at their feet. Feet that were no longer quite touching the ground.

A hazy mist had separated the two of them from the maisters and NoGender couldn’t hear anything they said, even though it was pretty sure they were still speaking or chanting. Where are we? NoGender tried to ask the Necromancer, but rather then actually speaking it felt like its words were snatched away from its mind and blown away in a fierce wind.

Her head snapped around sharply and she glared at NoGender with her sharp green eyes. Her words too, came from somewhere other, Did you not pay attention in the one class that I teach! We are in the spirit world!

She pointed upward towards the ceiling, but as NoGender looked up he saw that the ceiling was no longer there and that instead it was replaced by a seemingly infinite expanse of great lights. They were not stars, they were too large, or perhaps to small for that.

Ligeia reached over and grabbed NoGender by the arm, which now appeared to be attached to a shoulder that was whole again, and began to pull on it as she moved upwards towards the lights. When they began to move, any sensation of being solid left NoGender and if it had still had a working stomach, any leftover breakfast would have left it.

Where are we going? What’s Happening? It asked.

Without stopping for an instant, Ligeia’s soundless answer traveled back to NoGender, to see what we must do to begin the trials. I would like to get home as soon as possible and I ask you to do your best to not get killed.

There! That’s my edition to this ongoing tale! To continue it I have decided to tag Thespookyredhead! I shall continue to follow along and see where the story goes! Thanks so much for tagging me Arthifus!

A bubble of crappy anime reviews and the likes

"Stain your hands with blood even once, and fate will bring it right back to your door." -Blade of the Immortal

Come for the pop culture. Stay for the bad grammar.

Welcome to my Escape.

Anime/Manga/LN with too much toppings in one bento box.

"We are not obsessed. We just need anime and manga in our life."

MY corner of the Internet.